The Saltoun Supper Club is home of Arno Maasdorp.   Every Wednesday and Thursday, he graciously shares his evening with strangers and takes them on a culinary and philosophical journey.

Situated on the top floor of a Brixton terrace, we clambered up some steep steps, which yield and sing a comforting note of well used timber, and lead us into a dining room containing an eclectic collection of artefacts. An array of traditional African woven baskets lined the wall. The room has a French provincial feel, intercepted by modern art; and amongst this, is a fabulous black and white still portrait of Arno, regaling a fantastically thick, velvety moustache. Most of the artefacts are sourced locally at a local Brixton purveyor (who would later drop in at around midnight). 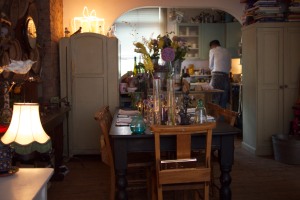 We were served a scrumptious basket of sour dough bread, and a salad with jamon to start. Gnocchi with truffle and cauliflower was served next; followed by a Welsh lamb dish and dessert of roasted pineapple and mint ice cream. None of these were as visually spectacular as I had hoped, given that Arno is a food photographer and caterer by day. But nonetheless, the dishes were satisfying and the flavours were most definitely delicious.

Between meals, Arno encourages guests to take in the views upstairs in the attic. Here, a heaving collection of books stacked on the floor threaten to break out and swallow the space, but it’s a book perched on an easel, called Cyclopedia of Drawing, published by the American Technical Society which took my attention.

The content appeared a little curious, but then the familiar chiaroscuro etchings of William Kentridge dart out. Kentridge’s drawings are reve

aled line upon line of pencil or charcoal. Corrections are almost always never fully erased, but just drawn over. The book is read by thumbing through its pages to reveal a magical metamorphosis. It is staggeringly simple artwork, but beautifully drawn; steep in allegory, full of hope, despair and redemption – themes that are recurrent in Kentridge’s work.

To uncover a little gem in a Brixton attic was a true highlight. I digress…but digressions such as these are exactly the point of these evenings…

Following an interlude, Arno and his assistant John, pulled up some chairs and joined us for a drink at our table, accompanied with an endless supply of a chocolaty assortment of petit fours. With the nights duties complete, this is where Arno seemed most at home.

the evening came to a close (at 1am on a Wednesday night), my most vivid recollections were not of the food, because simply it was not about the food; but more the sense of spirit and camaraderie the evening exuded. Arno prefers to refer SSC as a club as opposed to a restaurant. His simple philosophy is about good food, sourced sustainably, and good company in a genuinely hospitable space.

Arno’s menu reflects his restless mind – constantly changing and experimenting. So if I had the luxury of living in London, I would return to the SSC in anticipation of something great. Another chance to thumb through William Kentridge’s drawings would be enough of a reason to come back…