Girls night out and off we go to Surry Hills, home of the cool kids and no parking.  Well the cool kids are definitely eating at 4Fourteen, a newish bar & restaurant so hip it even starts with a number. The space is huge for Surry Hills – warehouse style with a vast open theatre kitchen and bar. Our party of 3 were promptly shown to our table by the very friendly door bitch.

The menu is my kind of eating – shared plates and big flavours in a trendy ‘dude food’ sort of way. Also, the mains are served in a Le Chasseur French oven, that make you feel almost like you’re at home (if of course a 12-hour slow cooked lamb shoulder is the sort of thing you eat at home).

We start off with a deboned crispy chicken wing served atop a liver parfait with apple chutney and tortilla crisp ($7.50 each). What a tasty little morsel! Having someone debone your chicken wing is akin to having your mum peel and devein your prawns at Christmas – an act of pure indulgence, mixed with a little bit of guilt that some other nimble-fingered soul has put the hard work into a single mouthful of yumminess. My only criticism would be that as a whole, it was a little hard to eat by hand or with cutlery due to the extremity of textures, from wet pate (which there was a little too much of) and chutney to crispy chip and chicken.

Next on the table were a couple of rolls – Not really the sort of thing that is easy to carve into 3 serves (being piled high little brioche buns of goodness), but we persevered. It might sound a bit strange to start with what is essentially a couple of fancy sandwiches before a main meal, but believe me, you cannot miss out on these. We opted for the confit pork belly roll and Reuben roll ($12 each). The Reuben was so good that I didn’t even waste the last half of my roll which fell into a deconstructed mess on the napkin in my lap. In fact, if I were to go back for drinks or even lunch, I would be ordering all 4 of the rolls and split them with a buddy, which would be a satisfying meal for $24 a head. 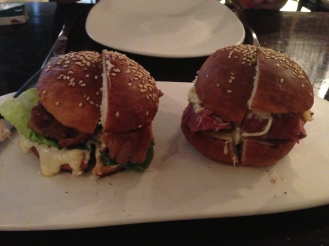 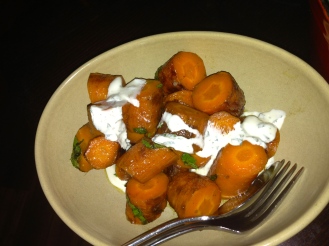 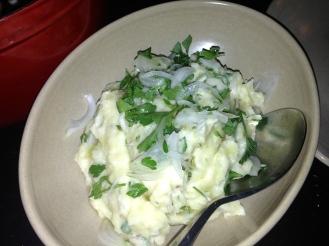 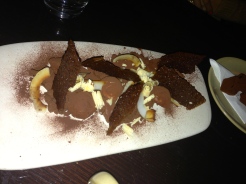 For our main we ordered under ‘larger plates’ – Beef brisket, fried bread & pickles($52) – great value which could have easily fed four adults. Sides consisted of orange & ginger carrots with cumin & yoghurt ($10) together with colcannon, that yummy creamy Irish mash/cabbage/leek combo ($10). Considering we had to doggy bag all of the above due to sheer lack of stomach space, we did still feel the need to soldier on for a shared dessert. We opted for the coconutty, chocolatey bounty ($16) and it’s a good thing we shared this – even between the 3 of us we couldn’t eat more then a few bites each, a little rich for my taste.

It would be remiss of me not to mention the awesome background beats and amazing service. I can’t comment on the drinks list given I’m teetotalling for the month, but the large dedicated bar in the middle of the restaurant looks well equipped to handle whatever your tipple is.

Huge thumbs up to this new eatery, if you’re looking for a hip and casual spot to catch up and share a tasty meal with friends. And if you are dining for 2, then definitely request a front row seat by the kitchen bar – after all, who doesn’t like a chef on show?