In the mood for sampling some pintxos, off we went to The Carrington, Surry Hills.

Popping up on various recommended lists and having frequented the place prior, but not reviewed it, thought we would back track to remember what all the fuss was about.

Once upon a time, a dingy old pub, now re-glamped into a cool grungy pub, befitting of its geography (Surry Hills). It’s a fascinating place to sit and people watch, and there we were, perched like two turkeys on stools in the front bar, doing exactly that.

The Carrington is a pub nation divided into two states – the front area is a traditional type boozer, where you can slip in for a coldie or stay and natter over nibbles. Out back resides the dining room. Though no matter where you sit, the full menu is available.

Despite the Sydney humidity, we had a case of eyes-are-bigger-than-tummy-itis. And from the start we made some mistakes. There was no convergence in how the menu read (in our mind) and what was delivered. At the end, we pondered whether we had made some real rookie errors and hung our heads a little. Truth be told, we went a little crazy for stodge. However, you will pass judgement on this call when you read at the end that we did indeed order dessert (as we sink our bowed heads a little lower). Sometimes, restaurants get it wrong, but rarely do we. This is one of those #fails in the ordering system.

Once we had fixed on our menu, I manoevered my way to the bar to order. V, very reasonably proposed that perhaps we should order some vegetables. I piped that suggestion down and said I would ask at the bar if we needed a salad. I sold in a convincing argument around the fact that we were actually ordering mushrooms, which were vege enough. I secretly thought that we would probably need more food. Mistake #1.

At the bar, firing away my list of food, I did ask whether, for the two of us, we needed anything else,”umm, like a salad or something?”. The guy behind the bar thought for a moment and said an emphatic “Naaaaahhh”, with a cheeky grin as he mixed up my Pisco Sour. Mistake #2

So there we were, sharing the lowdown of our week and swivelling our heads to observe the new tenants of stools nearby. One by one, as listed on the menu, our food began to arrive. 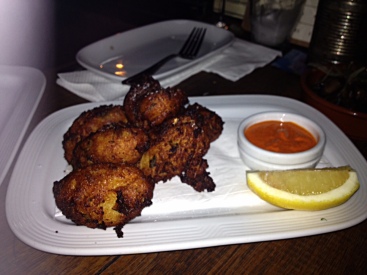 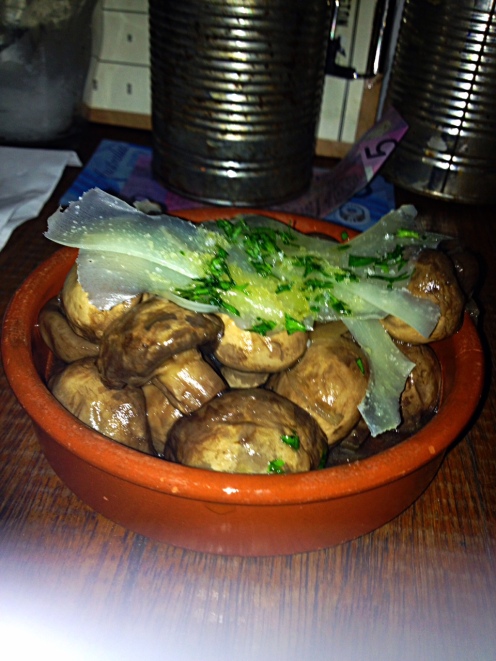 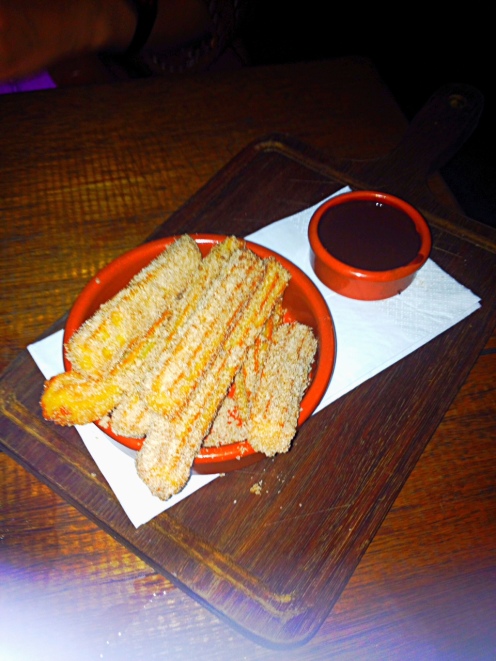 Paella onigiri w fried calamari. Dense rice wedges created a solid, sticky base for which to be adorned with fried calamari on top like a jester’s hat. We really enjoyed it and recommend it as a must order.

Media Noche. A triple pork, double decker toasted cheese sandwich with bravas fries. Since the the bravas fries came with, it saved us ordering these under the Tapas menu. The sandwich was sliced white overload. Three layers of bread, sliced on the longitude. Mistake #3. Triple pork was definitely a stretch. I used to get more ham on a tuckshop sandwich at primary school than what was being given away here. A fine shaving of a roast pork and a strand of jamón . I think the Count from Sesame Street may need to pop in and help the kitchen out here on the concept of the number 3. For a pork lover, the expectations were set high with the thought of a triple dose. We did feel gypped.

Marinated mushrooms and manchego. We were forewarned that the mushroom would be served cold. They kinda lost their appeal.

Salt cod fritters – quite heavy on the potato and skant on the cod. Our serve was a little too crispy, fried a bit too long.

Suffering from a carbohydrate coma, we were liked two well stuffed and breaded turkeys, ready to surrender to the oven at Thanksgiving. Defeated.

Well, not quite.
As we moved our necks around to continue our people watching, our eyes miraculously found a non-descript specials board.
“Churros with chocolate sauce”.
We eyed each other, shrugged and in a low, gravelly unison sang “yeeeahhhh”.
Back to the bar to order. Mistake #4.
I’m certain the bemused barman thought I had worms. Where the hell could I be packing all this food, beside my purse, and still come back, ordering more.
We had well and truly passed the point of no return.
Thankfully, a personal training session was just 12 hours away and so eroded my guilt.
Crisped, light and not at all doughy, the churros, warm and well dusted in cinnamon and sugar were delightful. So much so, the chocolate sauce accompaniment was just not necessary. But, we ate it anyway.

A great place to eat and the fare is consistently good, both in taste and value.