What’s all the buzz around pop up Cafe Paci? Well for starters, it’s not what comes to mind when you think of a cafe. It seemed everyone I know had been talking about it. The site is the old Cafe Pacifico, a tequila taqueria where I had spent the occasional night on the tiles (and tables). The space is all about economy, in true pop-up style. It’s had a lick of paint, to give the impression of Scandinavian chic, but for all intents and purposes, the room has remained largely unchanged. A couple of neon lights knocked out of the street signage demonstrates true economy, with ‘Cafe Pacifico’ reborn ‘Cafe Paci’. Genius. There is even a subtle play on the name of Chef Pasi Petanen.

The seasonal set prix fixe menu of $85 was what we were all about, cryptically identified by either a word or just listing ingredients. There was no way we could anticipate what would be forthcoming, only for grace of excited friends, who’d been there, done that and figuratively ‘got the t-shirt’, otherwise known as Cafe Paci evangelists (Jarek, Melody, I’m looking at you). Nine courses of extraordinary imagination is what distinguishes a degustation dining experience and its culinary artistry, the Maker’s Mark of The Chef. In terms of culinary creativity, Cafe Paci was outstanding. Visually interesting presentations and some really strange pairings made interesting bedfellows for many of the dishes. I do lament somewhat, at the lack of anywhere near substantial animal protein in the dishes. However, for the price, I think what was presented was fair. 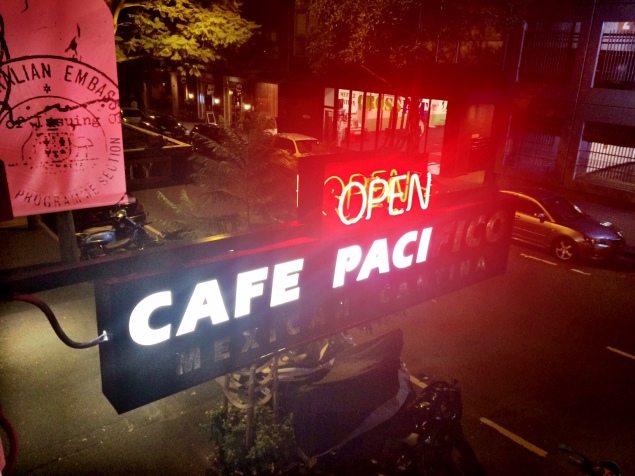 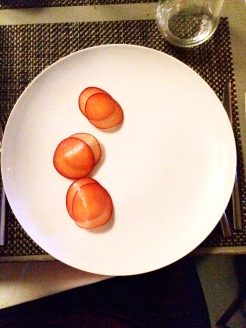 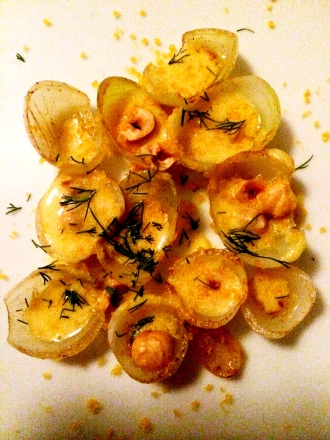 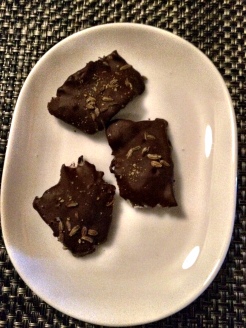 We started with a dose of gluten paradise. A dark mound of rye bread with hints of malt & honey. If that was manna, I was in the heaven of bread. I’m not certain it was part of the degustation, but the bread was amazing. It really was. ‘snacks’ kicked us into the set menu mode. Grouped as a trio – crispy barramundi skin was an unusual concept, but heck, went with it and was happy to chew and snack on the canapé sized bites. Then very quickly came a standalone dish of a cheesy taco emulsion. Good stuff.

After the nibbles were out of the way, we were presented with a succession of more substantial dishes, started with blue swimmer crab, sorrel, plum. Presented to us, sparsely on a large plate, I liked the idea of this combination – both texturally and flavour, but on the day, the pairings didn’t quite gel for my palate.

THAT’S AMORE was absolute love for me. The capitalisation is deliberate. Because, when you find love, you want to shout it from the rooftops. This dish tasted incredibly of pizza. In its entirety it delivered a pizza party in your mouth and the wonderment for me was how it could be achieved with such simple ingredients. In the words of Joey Tribbiani, “what’s not to love?”, Angus tartare…good. Tomato…good. Parmesan…good. Garlic & oregano…good! This was one of the real standouts of the evening.

Onion, lemon vinegar, mullet roe, hazelnut. It was prettily presented and quite tasty, though all we marvelled about when eating this dish was about how high the margin must be on the food, given they’d just deconstructed a cocktail onion and doused it in healthy lashings of butter.

Photato. A clever representation of the Vietnamese Pho. I perceived this a high value dish (ie, one that contained protein) I was eagerly anticipating the experience. When presented with flourish, we were instructed that the potato was shredded to represent the noodles as in a traditional Pho. This was worthy of the crescendo on the menu.

Onto desserts. ‘Carrot, yogurt, liquorice’. I quite liked this unusual grouping. The carrot gel and yogurt whip cut through the density of the liquorice cake base. For me, it was quite moreish. ‘Malt, banana, parsley’. This grouping provided for an interesting tang and the interplay between the banana and parsley. Though for me, the density of the paste made me feel quite full and soldiering through the entire dish felt a little like trudging in wellies in the rain.  ‘Corn and butter’ was essentially fairy floss in the shape of a popped corn kernel that tastes like popcorn. Who doesn’t love the popcorn flavour without those tiresome little kernel skins getting stuck in your teeth? ‘Pork and fennel’ was morsels of pork crackle smothered in chocolate and punctured with fennel seeds. As peculiar as it sounds, it was a very satisfying texture and flavour combination.

I’d be happy to employ a user pays system for the chance to sample Chef’s mastery for more meat/seafood dishes. The service and drinks list was good, though the cocktails I sampled were a bit ‘eh meh’. However, the experience wasn’t packaged that way. It was all about the food and the drinks and service were at an acceptable level to tack on. This I see as a considerably opportunity to really create something special, especially now the sense of “pop-up” fades, as the lease has been signed until January 2015. The only other criticism I would venture – the acoustics of the room. Fine for the days of table top dancing and tequila slammers, but for what they are serving and the ambience they are trying to hit, something needs to be done. I felt a little like Grandpa Simpson in conversation. I know I was shouting across the table and in turn, being shouted at, with very little clue as to what we were actually trying to say to each other.

Cafe Paci is perhaps the most refreshing approach to culinary artistry I have experienced in a few years, I’m looking forward to visiting again and if you haven’t been, enthusiastically encourage the same of you.