So the world didn’t end this week as the Mayans predicted, so it gives us no excuse for not posting a round-up of our 5 most memorable meals of 2012…

Our most anticipated meal of 2012. Dabbous has had an enormous buzz, winning several industry accolades since its opening in January this year. With impressive kitchen credentials ranging from Le Manoir, to Noma, and The Fat Duck, head chef Ollie Dabbous will no doubt continue to shine in his first solo venture if the wait list for a table is anything to go by. At this point in time, the next available dinner reservation is December 2013…but thankfully we pre-booked a table for April when we dined way back in June.

Highlights of the meal included a gorgeously flavoured coddled egg with woodland mushrooms and smoked butter, all served up in an egg-shell set on a bowl of hay, and the Barbecued Iberico pork, savory acorn praline, turnip tops, with homemade apple vinegar. The pork was perfectly cooked with the nuttiness of the acorn praline sealing the dish.

The emphasis here is light, modern cooking, clean flavours and seasonal ingredients. The dishes resonated with our experience at Noma last year, where the use of fresh, organic produce takes centre stage. At £54 for a 7 course tasting menu, it really is fantastic value for food and service of this calibre. And if you don’t manage to get a reservation, do drop into Oskar’s Bar in the basement for a cocktail, and you could just be lucky enough to secure a last-minute cancellation for a table, or a no-show – it does happen!

With Mexican street food finally becoming more prominent in the UK and Australian food scene after years of success in the US, we were thrilled to be able to take a belated summer break to the Mexican state of Quintana Roo to eat our way around the street food stores and local gems off the tourists radar.

We were treated with glorious sunshine, some of the most amazing talcum-powder beaches we’d ever seen, and received genuine hospitality by the locals. Several Tortas al Pastors were devoured from one particular vendor in Mercado Municipal Lucas de Galvez in Merida, chicken-filled Tamales were purchased from a late night road side street vendor in Downtown Cancun, and we lost track of the number of pulled pork tacos we demolished in Tulum…it almost reached a   point where we couldn’t face another corn-based meal.

Not one to be defeated, we persevered and managed to discover a gem of a seafood shack in Playa predominantly frequented by Mexicans – a very good sign!

La Bamba Jarocha is situated well off the tourist trail that is Fifth Ave on Calle 36; an unassuming family run restaurant, where every single dish is freshly made to order.

Kick off the meal with a giant-sized Margarita to accompany the complimentary corn chips, salsa and Habanero sauces; and we urge you to order the Sopa de Mariscos (Seafood Soup – $135 MXN), Jaiba Tostadas (Crab – $50 MXN) and most definitely the Tacos de Mariscos (Seafood Tacos, served two ways – $104 MXN).

Despite our broken Spanish, we still managed to get it right with the ordering – everything was absolutely amazing and so cheap!! 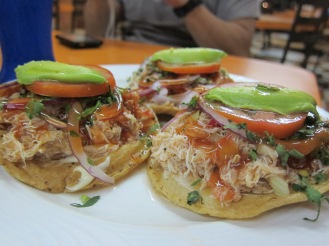 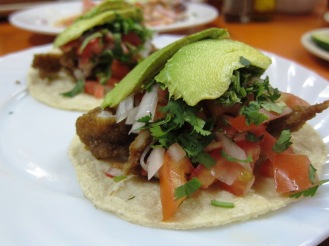 We Rub You @ Smorgasburg 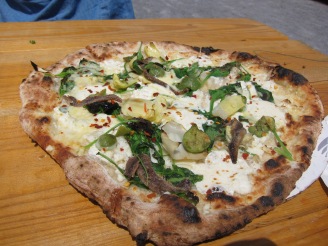 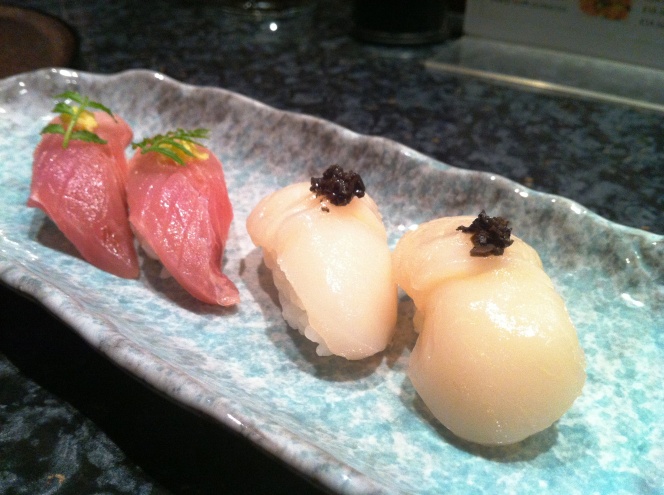 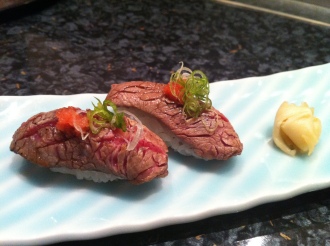 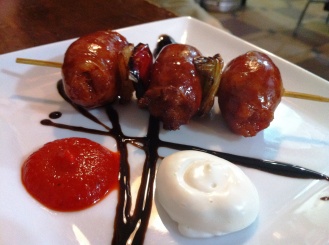 We’re spoilt all year round when it comes to food markets featuring London’s street food heroes at events such as Feast, StockMKT in Bermondsey Square, Street Feast in East London, and EAT St in Kings Cross, but the most impressive gathering of food vendors we’ve come across to date has to be Smorgasburg in Williamsburg.

While the Queen was celebrating her Diamond Jubilee, we took off to New York for a jubilant time in Williamsburg, eating street food with the hipsters.

Located on the waterfront against the beautiful backdrop of East River and Manhattan, Smorgasburg runs every Saturday from April through to November each year, 9-5pm rain or shine. Think of this as an open-air food festival…We spent a good 4 hours eating our way through all the sweet and savoury delights the vendors had to offer.

Worthy mentions go to We Rub You Korean BBQ for their Beef Bulgogi, Porchetta for their Porchetta sandwich with cracking crackling, Mimi & Coco’s for their plump shrimp Takoyaki balls, and Pizza Moto for their artichoke, anchovy and chili pizza. Oh and round off your tenth course with a Dulce de Leche doughnut from Dough and some Rhubarb shaved ice from People’s Pop if the weather permits.

Probably not a revelation to some of you sushi lovers, but this high-end sushi bar previously based in London’s Euston had been on my EATlist for a couple of years…and we FINALLY got around to visiting back in May.

Our dining companion was a bit of a novice on the sushi-front, so we decided to order a sashimi platter with additional selections of nigiri sushi, as opposed to the Omakase sets which they’re renown for. Every piece of fish was incredibly fresh, and the sushi rice perfectly seasoned as we watched the chef produce his craft in front of our eyes. They even provide little paint brushes so you can delicately dab the soy sauce onto the sushi (fish side up) – which is apparently the correct way of eating sushi.

Highlights were the scallop nigiri with black truffle, the chu toro, and the wagyu beef nigiri…I am in fact salivating at the thought of the meal as I type…

Sadly Sushi of Shiori is now closed, but has relocated and re-branded as The Shiori, now located on Moscow Road in Bayswater.

With one of the highest concentration of Michelin Starred restaurants in the world, and the old town dominated by pintxos bars, you really are spoilt for choice when it comes to quality food in San Sebastian.

Bar Astelena is without a doubt our favourite pintxos spot in all of San Sebastian, offering a range of modern style pintxos, mostly cooked to order.

Must eats are the solomillo a lo pobre (sirloin steak with red pepper sauce, fried egg and fries), the foie and mushroom rolls, the prawn and asparagus rolls, and the classic chorizo. Wash it all down with a glass of Txakoli, a locally produced sparkling white wine, served super cold. Service here is swift, and the food always beautifully presented, at bargain prices, at around €4 per dish.

Thanks for reading and your continued support and encouragement. We look forward to filling our bellies and sharing (more) of it with you all in 2013.

Happy eating over the festive season!