One of Sydney’s most recognised restaurants had never been at the top of my “must try” list. I’d read a lot of hype about Marque over the years, yet anyone I know that had eaten there, didn’t ever rave about it, despite it being named Gourmet Traveller’s 2012 Restaurant of the Year.  I got the chance to dine there recently with my friend, Uma – one stop of many on her farewell food tour of Sydney (she is migrating south, to Melbourne). A fellow foodie, we had spoken about trying someplace that neither of us had been to and so that is the story of how we came to dine at Marque.

The dining room is precisely that.  It’s a small space and tables are in close proximity to one another. But then, it isn’t supposed to be about the room, really.

Head Chef, Mark Best was seen at the helm when we arrived.  Seated quickly, we were offered filtered tap water or sparkling water, for a flat fee of $5 per diner. Filtered Sydney tap water for $5? Outrageous.

So began our 8-course degustation (with the optional cheese course a given, for this pair of Lactose lovers).

To kick off the experience, we elected to take a glass of champagne. Interestingly, it was poured into an unconventional chalice…a white wine glass. When pressed for an explanation, the sommelier said it was to “open the bubbles”.

Topline, four of the eight dishes had not just a hint of smoke, but a liberal dose of it – there was more smoke in these dishes than back burning a national park in summer. These dishes should have come with a warning, like cigarette packs, on the hazards of smoke ingestion. One dish of smoked flavour is acceptable, 1 in every 2 dishes is a stat higher than I can handle.

The first course was presented like a lemon meringue pie. It was the second sighting of foam for the evening, after the amuse-bouche. However, this course was sweet. Probably too sweet, for my savoury preferences. The marzipan flavour was overpowering. Masking the subtle beauty of the sweet crab and certainly overruling the caviar.

Second course was the second timed arrival of smoke. This course lacked texture. Everything was a little “mushy”. The prawn – the avocado –  mushy. The mellowness of the buttermilk allowed the mushy, smoky dish to wallow in limpness.

Our third course  really sang.  Celeriac is a favourite, teamed with shards of fresh apple. Crisp and crunchy, with a soulful, seamless balance of woodsy flavour and texture. Beautiful.

Fourth course.  The John Dory. I don’t often send things back to the kitchen (unless my eggs come out soft yolk…I like them firm enough to play tennis with) and on this occasion, the Dory was sent back. Why? Because it was floury and firm, like a well done steak. We expected it to be ‘just set’ as promised by the waiter. We were informed that “No, this is how the kitchen intended it.” Shame. To me, it was a perfectly good waste of beautiful John Dory. 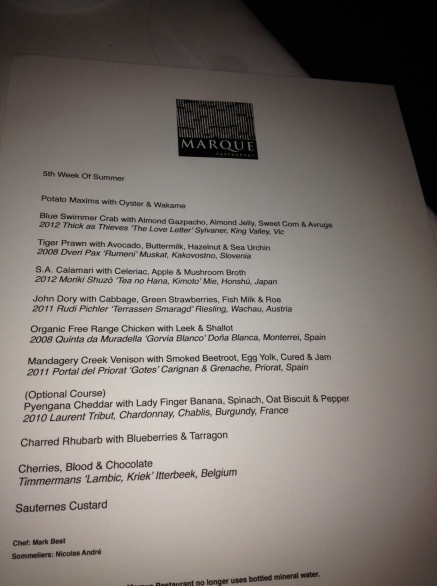 The chicken was just chicken, though accompanied with a duck liver parfait. Was nice, but not $360 bucks worth of nice.

For a meat lover like myself, one dish that ALWAYS gets me licking my lips in anticipation is a good old fashioned steak tartare. This one, a venison version, accompanied with the wonderful food staple of my ancestors, the humble, sweet beetroot, got me salivating at the mere idea of it. Guess what? Smoke reared its ugly head. The Venison was refrigerator cold; too cold. Cold and smoke overpowered the subtleness of the game flavour. Couldn’t even detect it. And to cap it off, the tartare was served like diced chuck steak. This made me cry a little. With tears of sorrow for the poor deer that was sacrificed for this ho-hum deal.

The cheese course. Was a little peak-a-boo, waiting for the cheese to talk to me on my palate. Instead, green banana wrestled with every flavour on this plate and won in smackdown like madness.

Next, on to the palate cleanser…you guessed it…welcome back old smoky, this time disguised under the term “charred”

Then onto dessert. Smoke didn’t want to leave us tonight and held on tight. The tang of the cherries was a welcome strike to the smoky chocolate and finally, Sauternes Custard housed in a cute egg shell and yep, I swear a little bit of smoke managed to find its way into the egg.

Throughout the evening, we were waiting for a sock-it-to-you dose of WOW. It never arrived. More often than not there was the total domination of one flavour or else a stilted layering that didn’t harmonise and mostly, it seemed, that texture had taken a holiday. A harsh review of this Sydney dining hotspot, I know. I apologise to those lovers of Marque. Maybe Marque and I, well, we’re just not compatible.